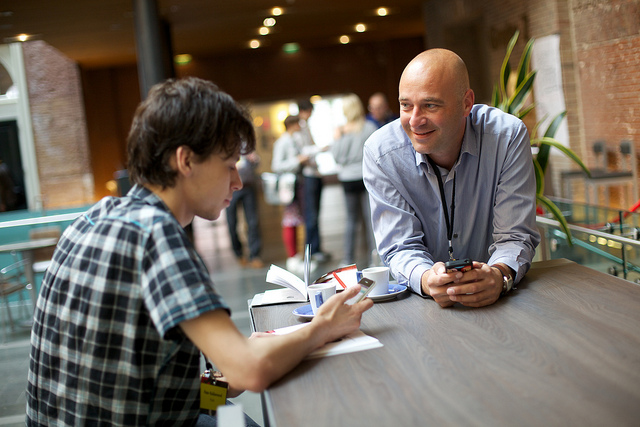 I’ve recently been ramping up development on Monkeyslunch, with help from some great people. While doing so I’ve not just been working on designs and a better experience (previews to come soon so I can solicit your feedback), but also doing a lot of research into how I can just be a better marketer, public speaker, engage my team better, get the products I’m going to be making out there in people’s hands, and more. I plan on sharing some of the insights I gather along the way, which is what this post is about– one of my first eureka moments, but also one that made me bash my head on the table because they’re things I used to inherently do and mistakes I see my fellow creatives struggle or fail with consistently.

So what is it?

Do you have that incredibly talented friend, the one that everyone wonders why they just aren’t getting noticed?  What about the friend who thinks they’re engaged in the right circles of people, chatting up industry professionals, even leaving comments in forums like “wow, awesome work!” and “thanks for posting this, you’re a huge inspiration!”?

Both of these creative people are great in their own way, but both are also missing their own part of the puzzle that prevents them from getting noticed.

Mistake #1 – Not engaging in the right circles

First, if you want people who will value your work to notice you, then you have to engage in those circles of people. Sounds like a no brainer, right? Unfortunately not. I have some of the most talented people in my circles. I went to school with them, I’ve worked with them, or maybe they’re my best friends, but when it comes to getting out there and meeting new people, or meeting the right people, they’re shy, awkward, or introverted. Which is a hard thing to break when you’re a creative person, because let’s face it a lot of us have been created from a similar template. It was natural for 90% of the people I met in art college to be incredibly socially awkward, and it still seems to hold true for a lot of us.

So, who should you look to engage with?

If you’re looking to grow as a creative, seek people that are also really talented in similar creative fields.

If you’re looking to sell your work, seek people who are supportive of your form of art. Organize a local sale or join one, hawk things at the farmer’s market. Ask any fellow artists with similar themes or styles in their work where they sell their pieces and if there’s anyone they recommend talking to.
If you’re looking for job but just sitting around waiting for one to fall on your lap, instead take samples of your work as nice leave behinds and go say hello at a few agencies, galleries and corporations you’d like to be involved with professionally and actually talk to someone.

Mistake #2 – Not saying anything of value

I’m talking to people and not being an awkward weirdo, now what? I comment on people’s blogs and forums on the internet all the time, I’m super involved. –Probably not. I see this all the time too, and fall into it myself. See, it’s really easy to think you’re an active member of a community, but the truth is that you’re entirely forgettable if you aren’t saying something of value. You don’t have to be eloquent and extremely well spoken either. Sometimes you just have to put in the effort of saying something more than a few words and with a little bit of empathy for the other person.

The first step is to get involved with the people you want to be involved with, but the second and probably hardest part is contributing something to that environment or relationship that will be seen as having value or get noticed. That part is going to be contextual, but if it’s someone you admire talent wise and all you’re doing is saying “wow, awesome” on their work, it probably won’t resonate. Instead, if you take the time (and exude the confidence) to leave meaningful feedback or a critique, you may actually engage them. Is their work really emotionally deep and touching on something personal? While everyone else is tiptoeing around things, maybe you could leave some kind words and relate to them with a similar experience. It’s going to be entirely based on what the circumstance is for you, but the point is that providing something of substance and value will have a better effect in helping you create new relationships and have people hold your opinion in high regard.

So how do those things get me noticed?

It’s simple. Engage in a community of like-minded people, and do so in a way that you contribute something of value. Not posting links to your work and asking people to please, please, please check it out, and not just making a ton of stuff and wondering why no one ever notices, and not saying meaningless comments and wondering why people aren’t coming to say anything about your own work. Asking people to visit your website is annoying and may as well be considered spam in most cases. Contributing nothing of value, and not talking to the right people is also just as useless. Instead, engage with the right people, say something meaningful, and then if it feels right and they don’t just visit your website or ask about your work and what you do naturally, then it may be okay to ask if they’d mind taking a peek.

In other words: To generate interest/traffic to your own work/website, organically, and be memorable: keep it real. It’s harder than it sounds, and I fall into being mesmerized and saying barely two words on something cool on the internet all the time too, or not getting out of the house but waiting for something cool to happen. We can do it, my awkward friends!

What is something awkward you do as a creative person that you think we should all stop doing?